Vulcania – To start off your adventure on the Volcanoes route, explore the park to learn more about the volcanoes of this itinerary, but also natural phenomena and the Earth in Space.

Puy Pariou – There are two routes to the top of the Puy Pariou, which rises to an altitude of 1209m. The first one goes through the forest and the second through the hillside. Once you have completed the climb, a perfect crater of 90m in diameter awaits you. The view is breath-taking! A small path leads to the centre of the crater, an ideal spot for a family picnic.

Orcines – On the way to Orcines, you can stop at the Puy des Goules, 1146m high and with a crater over 30m deep, which offers beautiful views of the Grand Sarcoui, the Puy de Dôme and the southern Chaîne des Puys.
Once in the town of Orcines, a stop at the Saint-Julien church, renovated in the 15th century, is essential. In this commune you will also find the Sarcenat castle and the Michelin family home.

Puy de Dôme – From the top of its 1465m, the Puy de Dôme, emblem of the Auvergne region and a must-see destination, offers a magnificent view of the city of Clermont-Ferrand, the Chaîne des Puys and the Massif du Sancy. The summit can be reached either by the Chemin des Muletiers (approximately 1h30 climb) or on board the Panoramique des Dômes (cogwheel train). The Temple of Mercury, a vestige of the Gallo-Roman era, is a fascinating monument to see at the top of the Puy de Dôme.

Orcival – The village of Orcival is home to one of the most famous Black Virgins of the Auvergne. The Château de Cordès, built between the 15th and 18th centuries, is also worth a visit in July and August.
Before arriving in Le Mont-Dore, you can stop at the Col de Guéry, where beautiful walks around the Lac de Guéry are possible. You will also discover the impressive Tuilière (1288m) and Sanadoire (1286m) rocks which stand in perfect symmetry.

Mont-Dore – In summer as well as in winter, this village is a paradise for lovers of outdoor activities. The air and water are always pure, and the village is also a renowned spa resort. Its hot healing waters have been known since Roman times. 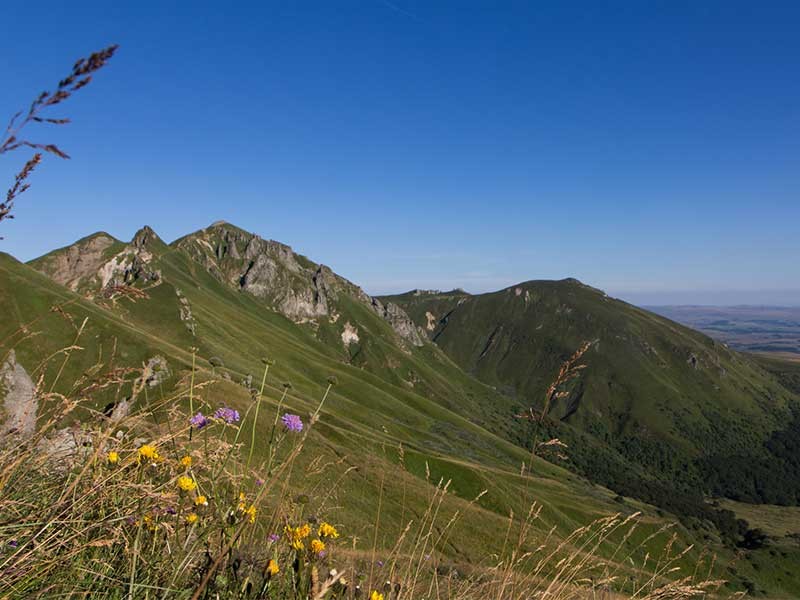 Le Sancy – After visiting the beautiful village of Le Mont-Dore, the Puy du Sancy awaits you from the top of its 1886m. The summit of the highest volcano in the Massif Central can be reached by cable car (accessible from Le Mont-Dore) or on foot, after a 3-hour climb of moderate difficulty. Once the highest point is reached, in good weather, the view can go as far as the Dauphiné Alps.

Murat-le-Quaire – This typical village of the Massif du Sancy, with its roofs of lauzes, overlooks La Bourboule and the Haute Dordogne Valley. Culminating at an altitude of 1515m, the Banne d'Ordanche watches over the village. The hike to this volcanic peak offers a splendid panorama.

Rochefort-Montagne – This 11th century village is situated near a deep valley which begins next to the Lac de Guéry. Nestled in a well-preserved natural environment, Rochefort-Montagne has retained many of the remains of its past, including a 15th century castle.

Pontgibaud – This village with a mining history has several buildings dating back more than 6 centuries: the Château-Dauphin, classified as a historical monument since 1995, the gate of the old town wall and the church are all monuments worth a visit.